Here, There and Everywhere

Over the weekend I had to go to a funeral for a co-worker’s parent. Actually it was the viewing the night before the actual funeral. Anyway, I was horrified to see one of the 20something grandkids sporting a short skirt and CFM boots that had her knee-high plaid very “Clueless” sock peeking over top of them. At a funeral?? One of her cousins was sporting flip flops, in 30 degree weather!
Am I getting old, or was this totally as inappropriate as I think it is?

On the way to work today, along the freeway connector I saw 2 hats laying along the side of the road. Both with a thin layer of frost over them. The hats? They were those 1920 gangster hats. 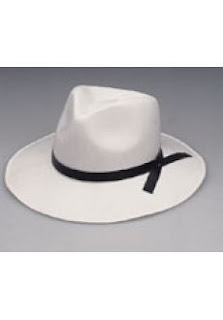 Weird, right? Just lying there, along the side of the road? They were about 20ft apart.

Today, as with everyday, I was late for work. So I semi-curled my hair and pulled it back into a clip. I noticed a slight color difference in one section and just chalked it up to the light or just the way my hair was laying. Until I just went into the bathroom, and decided to take a closer look. GRAY HAIR! A big huge chunk of GRAY HAIR. Now granted, I’ve had gray hair since I was like 25, and I’ve been doing my duty as a female by applying cancer causing chemicals to my head on a regular basis. I knew it was time to color again, and thank the gods I bought the stuff last night, because DAMUMMN sistah! I need some serious coverage! Makes me want to put a hat on it’s so bad.

BM dresses have been picked! Thanks to my sisters coming along with me this weekend we have decided on this, in Bordeaux. 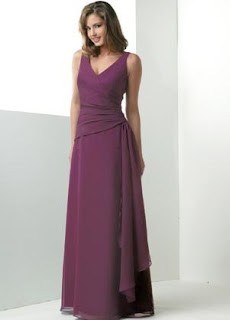 Granted, it’s long, and I know, everything I was looking at was short. However, my Sisters feel that long would look good on everyone, and because it’s a late afternoon wedding it would be better. So, phew! One less thing to stress about!
Of course, CBF e-mails me after seeing the pic sent to the all the other BMs with this little gem of good feeling: “I’m going to look horrible in that.”
*Sigh* Bring on the vodka.
Posted by DevilsHeaven at 2/11/2008 12:28:00 PM

boots and flip flops at a viewing? completely inappropriate... it reminds me of when i was in chirch this weekend and two of the people in the chior were wearing sneakers...one of the people, a man, had velcro sneakers one. like the ones preschool children wear.

just read the backstory to your most current post.
BM missing the point no?? And she's *gasp* 40??