I have a friend at work that had a pair of heels that she absolutely loved. Loved to the point that she had them resoled, like 5 times. After several years they were scuffed and scared and stretched out, I finally convinced her to buy new ones. The ones I found for her she didn’t buy. She went shopping on her own and bought a pair of shoes that she now hates. Hates to the point that she’s reinstating the old pair.
My point here is that I too had a pair of sandals that I loved. They were from Target, Cherokee Fisherman’s Sandals. I wore those suckers all over Europe. Wore them all summer. I LOVED those sandals, they were so comfortable. A few summers later while getting ready for trip to Australia I discovered that they really smelled. I hunted for replacements, all over the net. I could not find them. So I bought a pair of shoes that CBF said were like butter, a pair of Sketchers. She’s very foot conscience. I wore them all over OZ, and I HATED them. They were heavy and the black rubber insole made my foot sweat and turn black. Then the stitching started to come undone. I went back to my original Target sandals the next summer. I would switch between the two pairs, but ultimately, the Target ones would win out. Then the sole got a crack in it from one side of the shoe to the other. I continued to wear them. This past summer the insole came free from the sole. I was determined to continue to wear the sandals until they fell apart at the seams for the top leather straps were still in amazingly good condition. However, the SLAP SLAP SLAPPING of the insole back into the sole with every step I took drove me crazy. I began my hunt again and found a pair of nice shoes online, for $80 bucks. F shamed me out of buying them, saying that was too much to spend on sandals. I reluctantly purchased a cute pair of fisherman’s sandals from Payless and wore them to Boston. Where the straps came into the sole, the lump it created, poked me in the bottom of my foot and rubbed them raw. And then my knees started to hurt. I was able to fix the poking rubbing strap, but even so, every time I wore them last summer my knees would hurt. I cursed those sandals, and I greatly fear having to wear them again this summer.
So what all this is leading up to, is this; I found some new fisherman sandals that I think would be ultra comfortable. And they cost $85 bucks. They are Doc Martens. Docs are suppose to be very good shoes, but are they really worth $85 dollars? And can I, so broke it aint no joke, justify a pair of $85 dollar sandals? 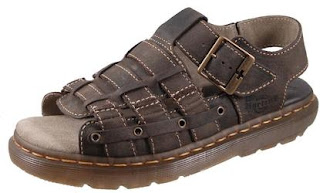 I realize they look kind of manish, but they are so damned comfy, if you get the right ones,and they look so cute with shorts, or jeans, or capris.
I also found a pair from Red Wing that are $75. 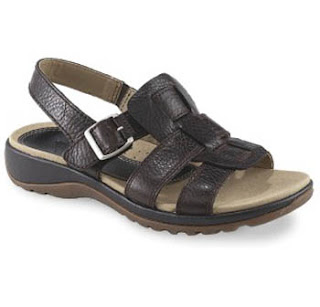 Thoughts?
Suggestions?
Oh, and JcPenney's is having a sale, so I checked out their website too. They have a pair of Clarks on sale, so I went to the Clark's Website. Um, HI! I'll take one of every pair of your sandals, Thanks!
Oh, and I found THESE on the Penney's website, I think I may have found my Wedding Shoes!!!!!!!!!!!!! 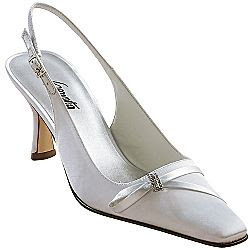