Sleep study is done. Surprise! I have Sleep Apnea. I haven't gotten the full diagnosis from my actual doctor, but the Sleep Tech was rather impressed with my lack of breathing.
It took a good hour to fill out all the paper work and for my Sleep Tech to attached all the electrodes to my head. When she was done I kind of looked like the Queen Borg with all the wires coming off my head.

I was completely exhausted when I arrived at the sleep clinic, and so of course I assumed I would have no problem falling asleep in the nice big bed I was going to have all to myself, in the nice dark and quiet room I would also have all to myself. Yeah, not so much. The mass of wires attached to not only my head, but my face and legs as well, was less than easy to sleep with. There was a nose piece in my nose that had another piece hanging from in case I began breathing through my mouth. It kept stabbing my upper lip. The tangling and rolling over and the leds poking me in my face, not so comfortable. I think I finally managed to fall a sleep around midnight only to wake up and become horribly antsy at 1 am.  My legs were spazing out. I couldn't get comfortable, I was about to freak the hell out when I decided it might help if I went to the bathroom.  That of course was no small task. And something I needed help doing.  I lay still in the dark room and timidly called out to my Sleep Tech, "Hello????"
Over the intercom she answers, "Do you need to use the restroom?"
"yes" I responded feeling foolish.
She came to my room and unhooked the mass of wires from the main thing they were plugged into, and slung the mini board around my neck.  Going to the restroom? Not at all graceful. I had wires down my sleep shorts which were connected to my legs, I had all the others from my head and face slung around my neck and an oxygen monitor on one of my fingers. AWK.WARD.
I shuffled back into the room where the Sleep Tech was waiting for me. "I'm going to put the C-PAP mask on you now."
The head straps there went under all the wires that were coming out of my head.  It forces air in. Making it harder for you to stop breathing.  I thought I might need the full face mask:

﻿﻿ ﻿﻿ Did I mention that I had taken a sleeping pill after the Sleep Tech tucked me in the first time? Well I did. And then a mere 4 hrs later I took another half of a sleeping pill.  If was after that half that sleep FINALLY over took me. I was zonked out. At 6 AM my Sleep Tech came woke me via intercom. I was so incredibly out of it, I had to use  my GPS to drive to my mom's. A route I take on a DAILY BASIS.  My plan was to maybe nap for an hour or so and then get ready for work. I slept really hard for 2 hours. When I emerged from my old bedroom my mom looked at me and proclaimed, "You look SO MUCH better than when you got here!!!"
Thanks mom.
So, talk about sexy eh?? You know you want one of these too! 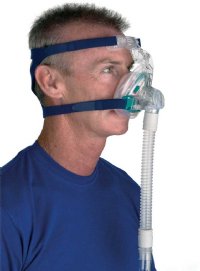 Well at least after I get this contraption F and I can sleep in the same room again. ALL NIGHT instead of just part of the night.
YAY BABY.
Posted by DevilsHeaven at 10/20/2010 10:03:00 AM

Labels: Gettin Old, Health, It annoys me, It saddens me, Married